There’s a Skeleton in My Closet!

A Skeleton Boot Sociable on City Gear, that is. At least, that was the name of the carriage I was challenged with identifying at the Dairyland Driving Club’s first-ever Carriage Tour Party held a few weeks ago in beautiful but warm Wisconsin.

Let’s back up a little. I’m the president of the HUB Club. We’re a little carriage driving club (60 members) in the northern Illinois/southern Wisconsin area. We partner with the larger Dairyland Driving Club based in Wisconsin (130 members) to bring clinics, shows, recreational drives, and educational events to carriage driving enthusiasts in the Midwest. If our groups had a motto, it’d be “safety, fun, and food.”

Two members of Dairyland have extensive private carriage collections and are quite knowledgeable about carriages, both modern and antique. Ingrid and Howard coordinated with Dairyland to invite the members of the two driving organizations, their family and friends for an up-close-and-personal look at their wide variety of carriages and sleighs, sample some great food, and learn a little something too as described in the promotional flyer:

The first stop was Ingrid’s Haflinger farm, where there were so many attendees (90!) we had to split up into two shifts to tour her extensive carriage house containing over 25 antique and modern vehicles. This worked out just fine though, because while one group was oohing and aahing over the beautifully restored Ladies Phaeton, Sidebar Golf Gig, Governess (Tub) Cart, and others from the late 1800s/early 1900s, the other group was sipping cool citrus water and nibbling on pastries while reclining on the shady patio. 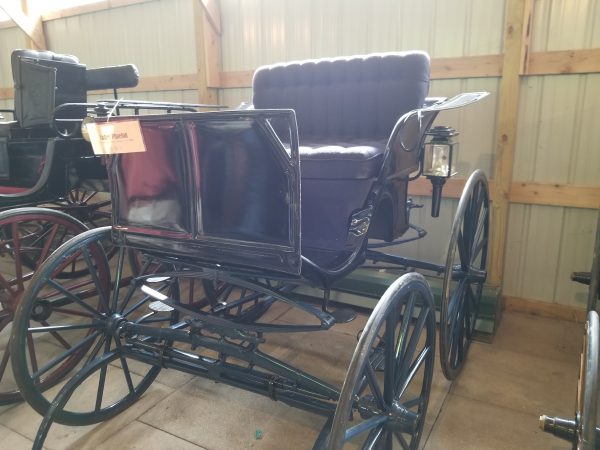 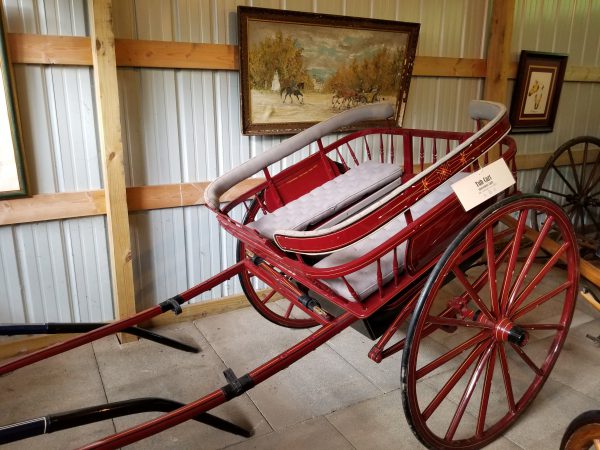 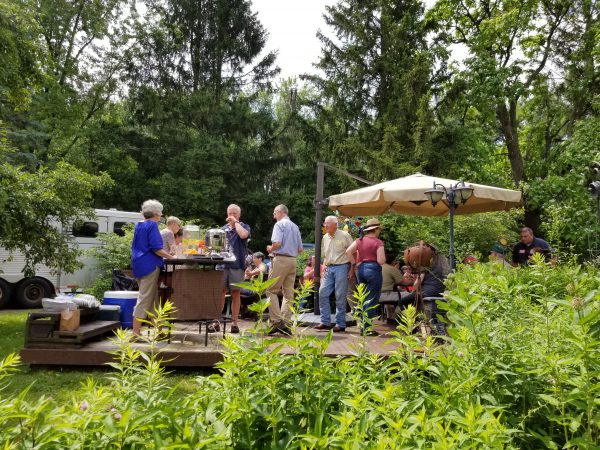 The second leg of our journey required a bit more work, but there was also a bit more reward. No one can put on a potluck lunch like a driving club, and we must have sampled and tasted and eaten for over an hour. During this time, Howard handed out placards and zip ties in preparation for a little game of “Find the Carriage.” As the group toured his lovely property landscaped with colorful and fragrant annuals and perennials, we would come upon a carriage, talk about its features, and identify it for the person with that sign to attach to it. 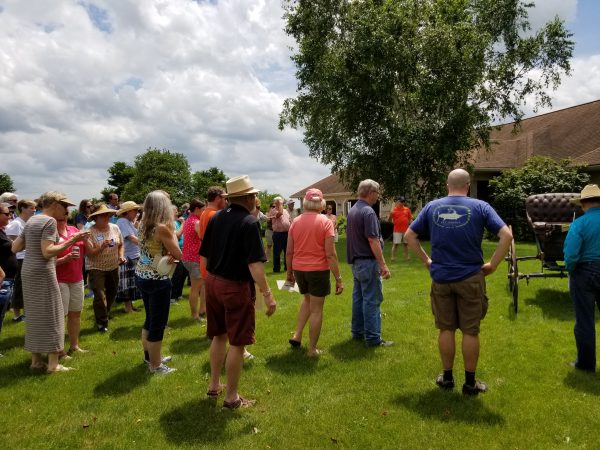 My sign said: “Skeleton Boot Sociable on City Gear” which meant I was on the lookout for:

With a collection of more than 30 carriages, I had my work cut out for me!

Along the way, Howard demonstrated how to maintain axles and wheels, regaled us with scenarios involving Sporting Breaks “back in the day”, and displayed his impressive wall of carriage driving accessories that included 100 different wrenches! 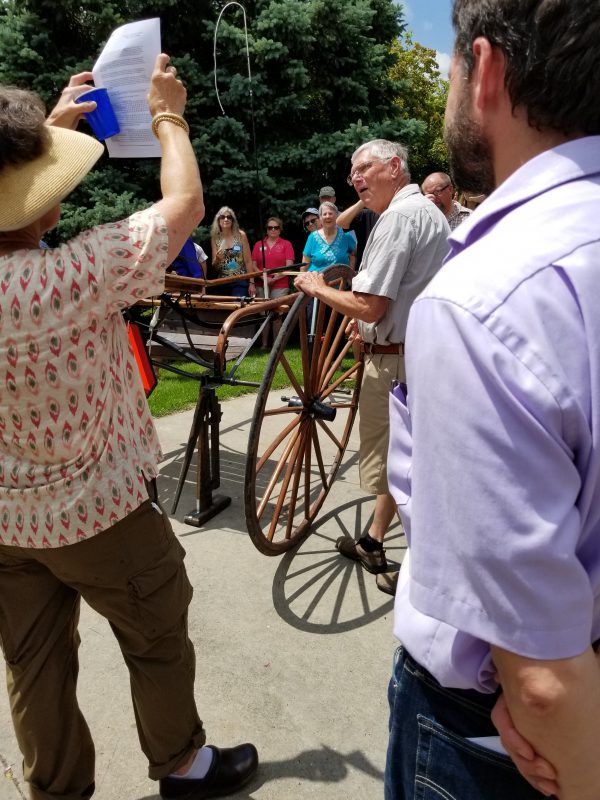 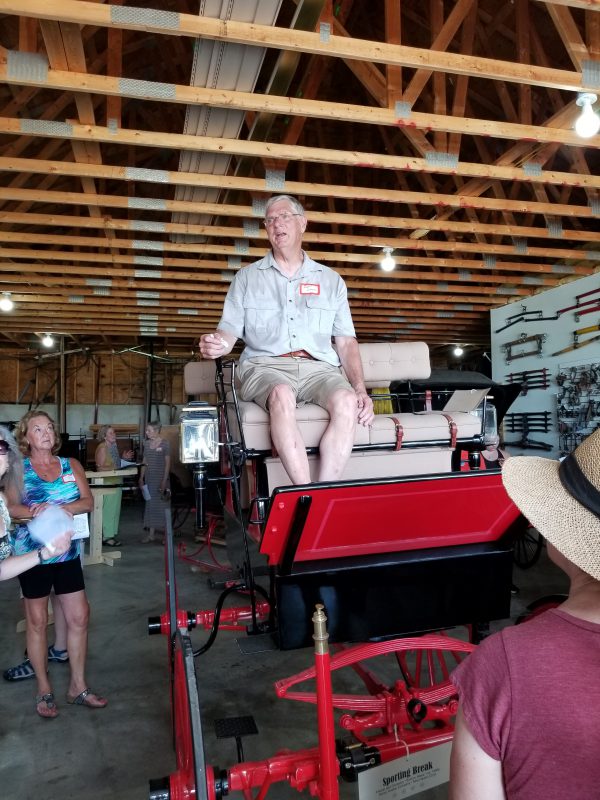 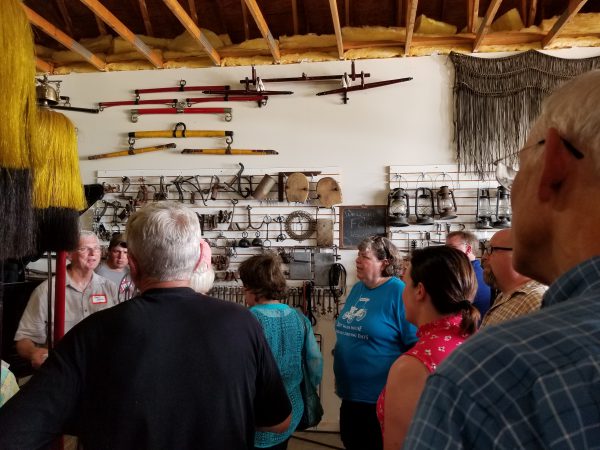 I was getting nervous because we were running out of carriages but suddenly there it was! A “see and be seen” horse-drawn vehicle made for being driven through the park in town in which the ladies could gossip with each other, the Skeleton Boot Sociable on City Gear! 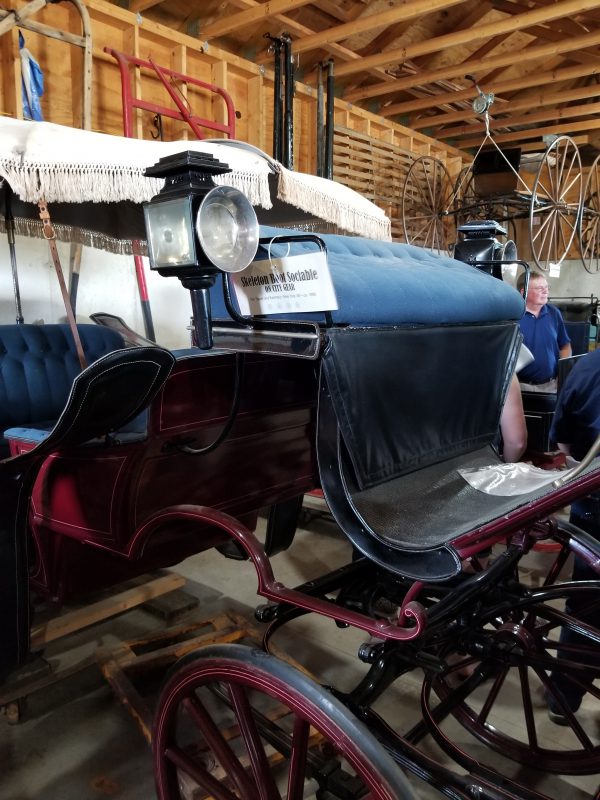 Howard let me clamber up into the coachman’s seat (sorry no picture) and it’s surprising once you’re up there how high and precarious it is, and that’s even before two to four horses are hitched to it and it’s moving!

The Dairyland Driving Club’s Carriage Tour Party was a once-in-a-lifetime experience that I’m glad I had the opportunity to participate in!