Dan Williams’ showing blog: I’ve been trying to schedule sleep on a Tuesday and Thursday between 3am and 6am 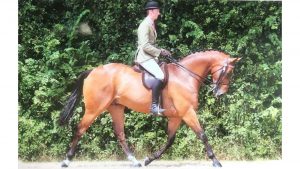 So it’s been a while since my last blog. In fact, I haven’t put anything out since The Royal International Horse Show, where I managed to vlog every day in what was the hottest few days in living history. Heat stroke and frizzy hair was certainly not the look I wanted to show to the public. Hopefully you enjoyed being able to see a bit of what goes on behind the scenes at shows like the Royal International and weren’t too distracted by how horrific I looked. I normally wouldn’t take a photo without a filter on, so having to make videos with my real face on show filled me with fear!

I had the most fantastic time at the Royal International despite the heat. We had five horses qualified, which was amazing considering this is my first year doing the horses full-time and not having to juggle an office job alongside producing my horses. The organisers were very kind and gave us the option of competing without our show jackets. But as all of us showing folk are stubborn and refuse to look anything less than perfect, we all sweated it out in our tweeds. It was bad enough for us competitors, but the poor judges who had to ride up to 40 horses in some classes must have really struggled.

A few highlights from the Royal International were watching my friend and owner Ailsa Duff ride her own The Baroness II in the coloured class. Their gallop was amazing, and I was lucky enough to have a turn on The Baroness II myself in the heavyweight cob class on the Sunday, when the weather had changed and we were back to the more familiar mud and rain. Another fantastic moment for me was seeing my friend and yard manager, Shelley Harrington, ride my small hunter Chriskells Otis in the small hunter class. Again, their gallop was fantastic to watch as they came flying up the hill. This was Shelley’s first season showing for me and she qualified Otis at her first show of the year. I love riding in the ring myself, but seeing the joy on my friends’ faces as they rode around those rings was priceless.

The ultimate highlight of the week for me was riding my gorgeous Broadshard Simplicity in the large riding horses. I had a great time catching up with friends in the ring, and when I was called forward into eighth place, I stood there like a stunned mullet, not quite believing what had happened! My first placing at the Royal International Horse Show! Saucy, as he is know at home, gave me the most amazing ride and went beautifully for the ride judge too. I was so pleased with how he went for both myself and the ridge judge, so being pulled forward into the placings was a real dream come true and took a few days to sink in. It might not have been first place, but I’ve dreamt of placing at a big show like the Royal International forever and it gave me the perfect excuse to buy the nice glassed framed photo!

Since the Royal International, it has been a summer of challenges and chasing Horse of the Year Show (HOYS) tickets for the team. I’ve said previously that I run a large livery yard and the main challenge is staffing such a big operation. If you are a man down, you have to pitch in yourself and then try and find the time to do all the other things like fixing fences, paperwork and working the horses.

We have also been busy setting up our new rug washing business, trying to get everything in place in time to be able to wash and reproof everyone’s rugs in time for winter.

With everything going on, I have been trying to schedule some sleep on a Tuesday and Thursday between 3am and 6am. I’ve also thought of buying the food that astronauts eat to save time on having to cook! I can’t complain — I’d rather be busy than sat around with nothing to do, but I am a bit jealous of the dogs snoring away while I sit and type this.

Dan reports back from a sweltering day at Hickstead

The excitement continued this summer with the arrival of my beautiful foal, Marwyn John Boy. Baby John is by the prolific stallion, Avanti Amorous Archie and he is even better than I could have ever hoped for. Baby John is full of character and I am looking forward to showing him in hand next year as a yearling. He is so beautifully put together and is the biggest time waster! I could literally spend hours playing with him and he gives the best cuddles.

So it has been a busy few months and I have so many shows to report back on, some good, some bad, so keep an eye out for my next blog in the next week or two. Some of the feedback I have had from the judges this season will leave you stunned and now that the season is over, I can look back and laugh but at times. I had to dig deep to find the strength not to give the judges my own personal opinion.

For all the latest veterinary advice, don’t miss Horse & Hound magazine, out every Thursday