Hovis’ Friday diary: ‘Dear Santa, please can I have a new home for Christmas’ 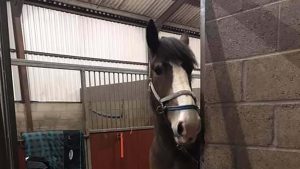 Well she’s back. Mum didn’t stay “byed” for very long and re-appeared last weekend like a unwanted relative at Christmas – full of opinion, bearing naff presents and having an unhealthy desire to want to kiss me. I bore the criticism, crying and kissing with my usual manner (which is to say I hid) and silently wrote my letter to Santa asking for a new home for Christmas.

The hole in my foot continues to be the main topic of conversation and may soon overtake Brexit in terms of the total amount of angst caused. Herman the German Needle Man came and x-rayed my foot last Friday, which revealed very little, and then spent time on the phone with mother in India, which may well have caused a phone bill that eclipses Greece’s nation debt. Once they had ascertained that no mother wasn’t now working in a call centre in Mumbye, no there wasn’t anything obvious on the x-ray, no mother hadn’t been kidnapped into some sort of harem nor indeed sold for a camel or two, a plan was hatched. Well I say “hatched” but “hatched” implies fresh new thinking, the birth of creativity, neigh indeed the faint chirping of talent and the unleashing of something beautiful upon the world. So, really what I’m saying, on reflection, is the use of the word “hatched” over sells the cunningness of the plan, which to be honest two drunk squirrels could have come up with in the time it takes Trump to take his toupee down.

The plan involves a three-way (conversation I hasten to add, you perverts) between Herman, the dude who attacked my foot with a hacksaw the last time and the mothership to come up with a course of action. I’m sure mother will fill you all in once said conversation has been had and she’s figured out whether she loves me enough to sell mini-mother to pay for whatever I need doing next. Let’s face it, she’s run out of her own body parts so unless you lot are going to volunteer a kidney or two, then getting top dollar for the small blue-eyed, blonde thing is really the only course of action left.

Now a plan has been formed, Cool New Shoes Man was dispatched to tidy up my tatty tootsies and get his monthly man-on-man time with his equine idol. I’m now in possession of beautifully rolled toes, slightly soggy whiskers, stubble rash and a faint air of violation, whilst CNSM has a hernia and the happy glow of a man who has had Hovis hugs and snogs of slightly dubious consent. He also did the cow-child’s feet, but it’s fair to say there was no snogging involved – clearly CNSM does have some standards and doesn’t see the need to play tonsil hockey with the equine equivalent of Dougal. Mind you he’d need a map to find a mouth under all the hair. I’m more and more convinced that the mass of mane is to act as a draft excluder so that we can’t hear the wind whistling between the gap between his ears. I have the excuse at times that my feet are a LONG way from my incredible brain, and thus occasionally I can get discombobulated, but since he is about six inches tall he can’t exactly claim the equivalent.

One showjumper is setting trends when it comes to competition clothing

Every day, our horses work for us tirelessly, teaching riding skills, providing therapy and promoting equestrianism. In this series, we

I was rather horrified the other day when rebel members of the Hovite Army suggested the cow-child should come along to Your Horse is Alive with me. Just to be clear people he is not a side kick, he’s not my wingman, we are not some sort of equine double act, he’s not the Dec to my Ant nor will he be in anyway featuring in my limelight. He’s just an unfortunate cross I have to bear in life – kind of like haemorrhoids. What do pint-sized piebalds and piles have in common? They’re both a giant pain in the bum. Badda bish, badda boom! Thank you – I am available for weddings, birthday parties and any mass gathering involving moral-less mares and molasses. Please contact my agent for bookings.

Anyway I’m off to ponder whether I will ever see a time in my future without a nappy on my foot, contact my broker about upping my shares in duct tape, and hide from mother who is currently plotting operation “turn feral to fabulous”, which seems to involve a lot of sharp implements and removing half my hair. Lord help me…