The diary of the home-made livery yard: ‘the type of fall where you lie very still and undertake a mental assessment’ 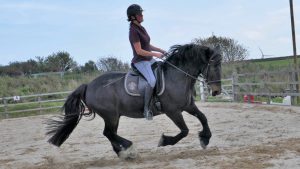 Stables never seem to stay empty for long round here. One of our long-standing liveries, the lovely Wendy, recently graduated from ‘First Time Horse Owner School’. The time finally came (as planned from the very beginning) for Wendy to confidently take her pony, Star, home. We were all delighted for them and Wendy was hugely looking forward to enjoying the privilege of being able to check on her pony, at night, in her pyjamas.

Good luck to Wendy and Star!

As well as being thrilled for the happy owner-pony couple, I naturally felt slightly anxious about the prospect of losing a livery client at the onset of autumn and winter. Winter is a time where costs often rise for yard owners and an increase in the intensity of basic yard work means less hours available in the day to earn extra fees through schooling horses or teaching. Winter is really tough. Physically, mentally and financially.

I often worry that I might have already snapped up all the clients in the area. North Cornwall is fairly remote and there is a limit to the number of horse owners who both require and also can afford full livery.

Inevitably, as a yard owner, once somebody has handed in their notice, you have a little panic and start to think about how you are going to juggle all your current yard and family duties with, perhaps, a supermarket checkout job? You know, something ‘normal’. One’s thoughts turn to alternative part-time work options and absurd diversification ideas. I know, for a fact, that I am not the only yard owner who has clocked the trend for ‘Pony Play’ (please Google it, for the unfamiliar) and ‘humorously’ discussed hiring out our authentic equestrian premises, as a diversification option, with our other halves. Such is the severity of the panic. As it turned out, there would be no need for a mass purchase of face masks, mouth gags, chains and whips. The stable was filled before the advert had been up for 24 hours, as well as an additional stable I had been using for storage. So, I am back up to 11 horses for autumn. Just the way I like it. 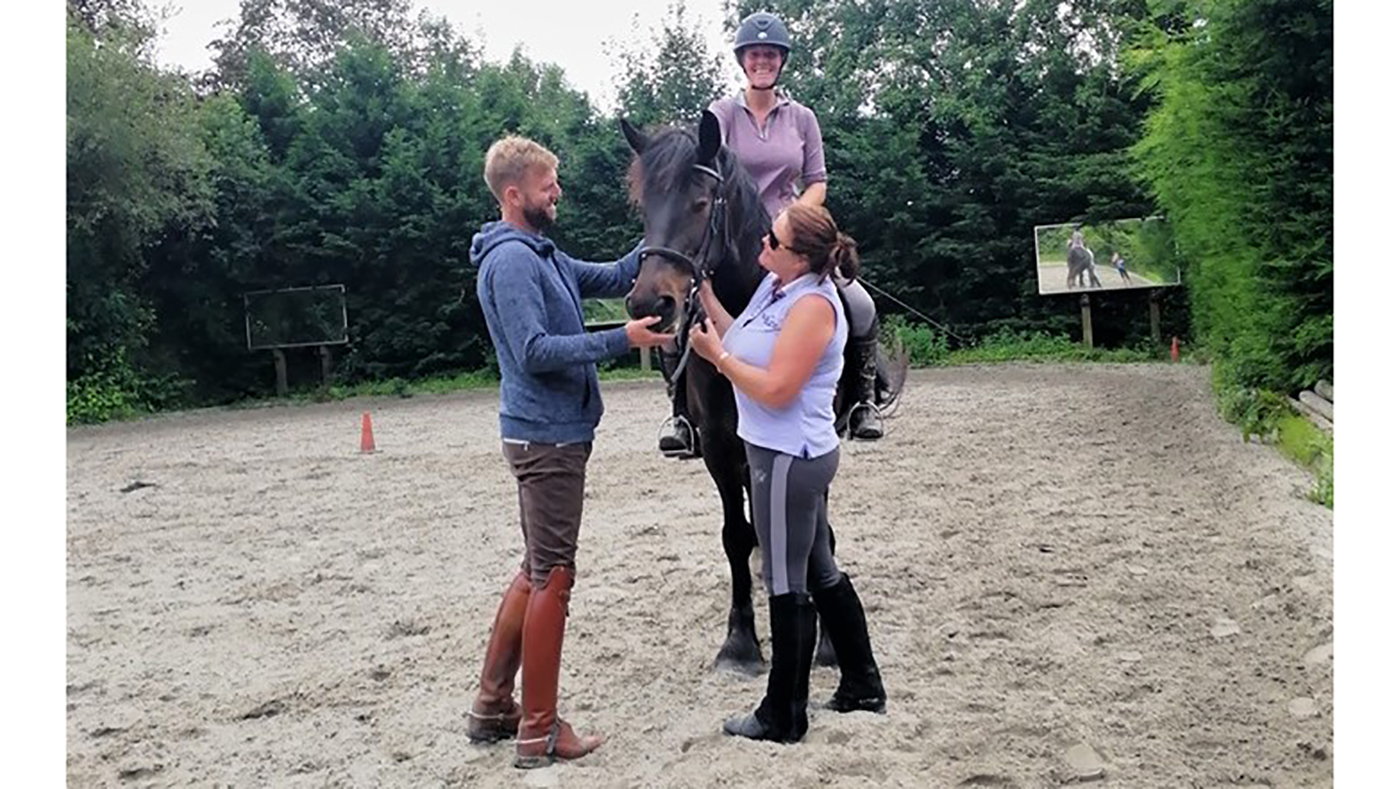 If you are a Facebook type of person, you will have noticed that there has been a huge step up in censorship and policing on the site, lately. Facebook are clearly trying to protect their ‘community standards’, which is to be respected and applauded. But with this task largely delegated to artificial intelligence and not to real-life humans, great numbers of frustrating and hilarious mistakes have been made in the process.

Lots of my friends have come a cropper with this recently. Posts about beloved pet horses have been taken down as Facebook has deemed them to be against community standards on guns and violence. Absurd! Another had a post about a barefoot pony taken down for breaching standards on nudity or sexual activity. Laughable. I fell foul myself when I posted pictures of my young son, in skin coloured clothing, and was duly banned from posting or interacting on Facebook for three days for child exploitation. 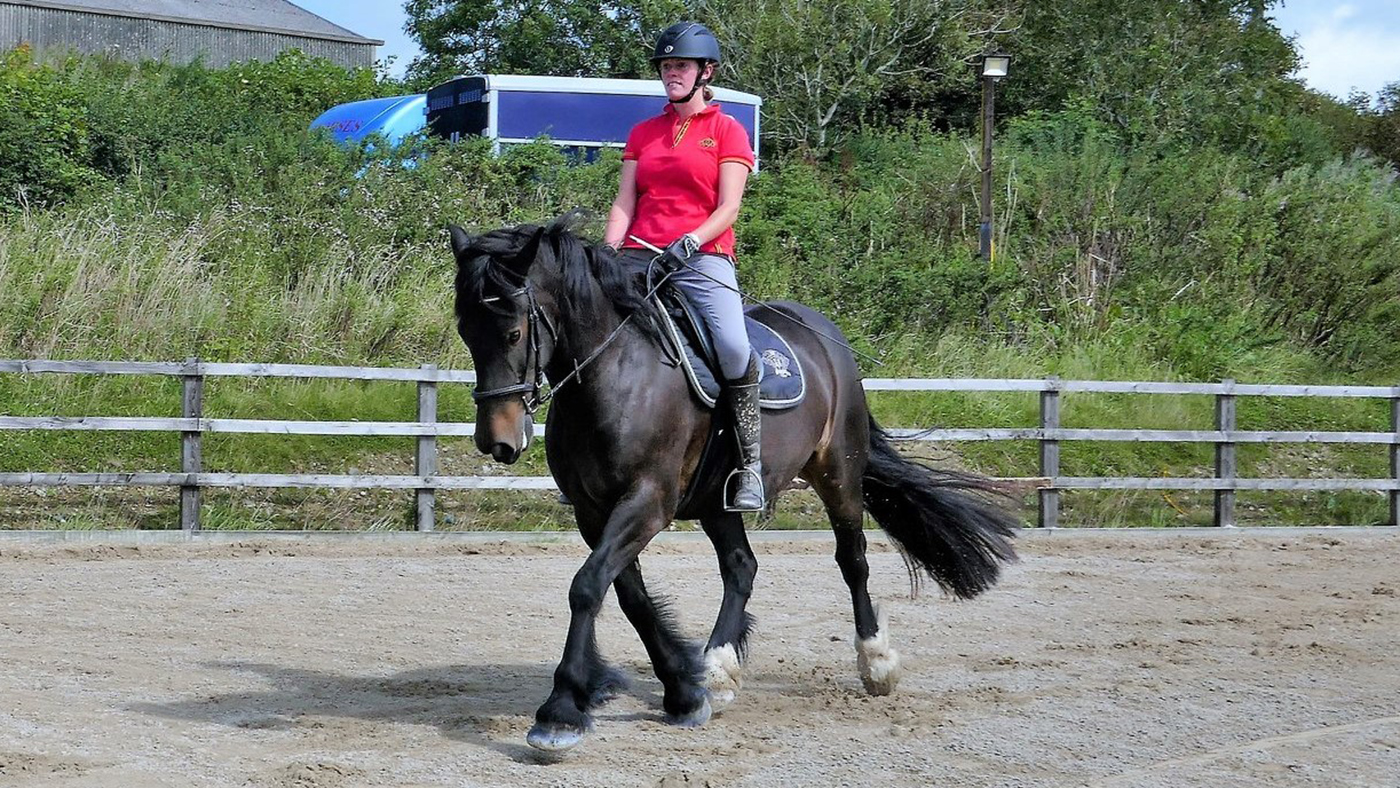 Me doing some Cricklands prep with Chunky (also pictured top)

During my three-day Facebook ban, a neighbour phoned me while I was out to inform me she had just given police officers directions to our property. My heart went through the roof. With visions of a SWAT team and police dog unit, sent by Mark Zuckerburg, arriving at South Woolley to seize our laptops and phones, I frantically called my husband to warn him and find out what on earth was going on. Thankfully, it was information on a harmless and totally unrelated incident the officers were after and I shortly arrived home, having narrowly avoided arrest and imprisonment for child abuse. In my head, at least.

Remember when you were a child and a teacher at school would say, “I need a volunteer, please?” Everyone would put their hands up and the teacher would retort: “You shouldn’t volunteer yourself until you know what you are volunteering for!” I had a timely reminder of this lesson a couple of weeks ago when I signed up for some CPD for my BHS Welfare Adviser role. 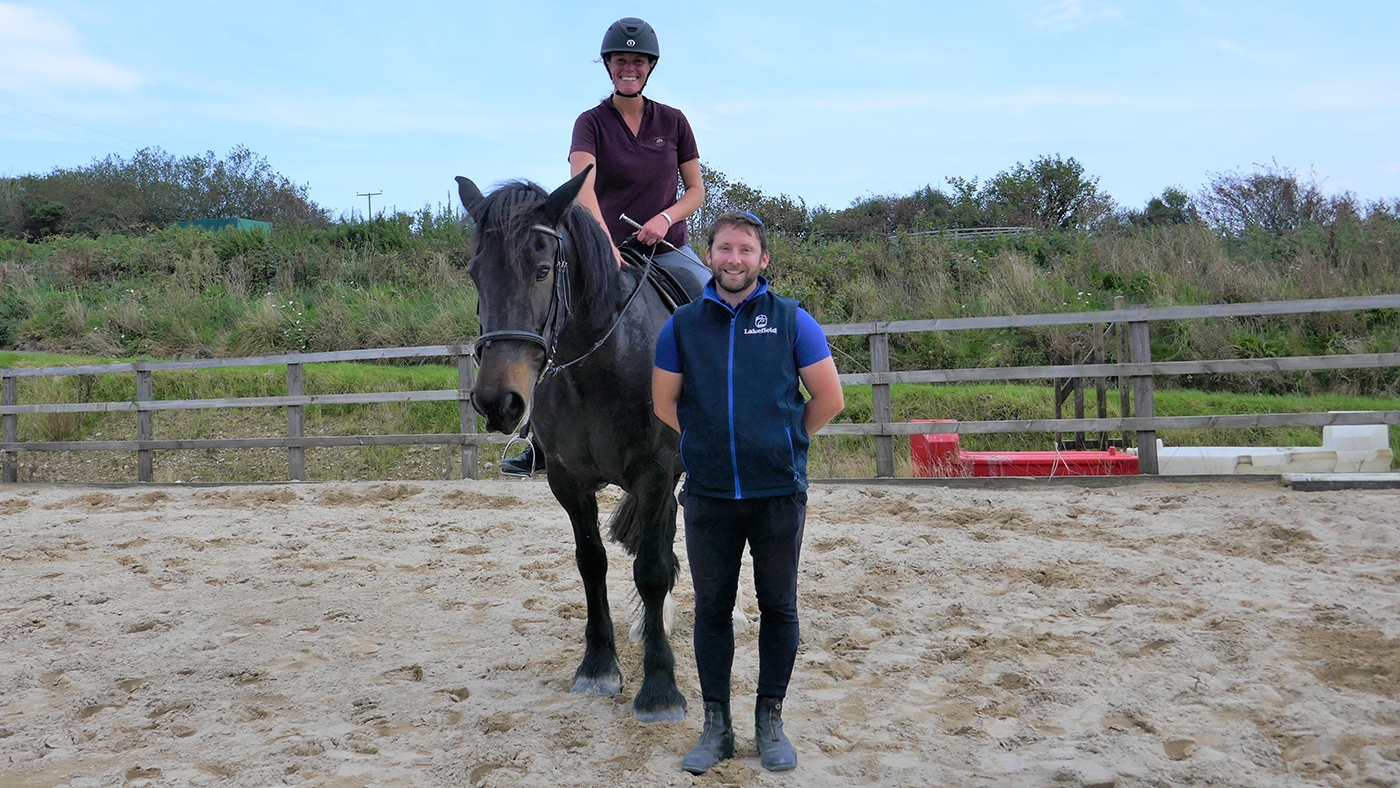 Our local vets, Penbode, put on some brilliant lectures and informative evenings that their clients and the general public are invited to attend. The lectures are always suitable for my CPD requirements so, without even looking at the topic of the evening, I bought my ticket to go. I was slightly puzzled when the venue turned out not to be the usual memorial hall set up, with licensed bar at the side, all ready to lubricate my learning brain. Instead we were to meet at the veterinary examination room and stables. Curious now as to what I’d let myself in for, all became apparent when David Rowlands, head of equine, gathered us attendees round and cautioned us that if anyone were to feel light headed or nauseous, we should feel free to escape and get some fresh air. It soon dawned on me that I had signed up for a live anatomy tour of the horse! Luckily, this sort of thing is right up my street and I found it absolutely fascinating. When we were all offered gloves and permitted to get stuck in, feeling tendons and ligaments, I was the first one to roll up my sleeves. Huge kudos and thanks go from me to the anonymous, kind lady who donated her pony’s body in the name of education.

The countdown is now on to Cricklands Dressage Championships for me and Jo Bunker’s Chunky. My daughter, Ellie, and liveries, Lauren and Kate, are also entered. We should have lots of fun. 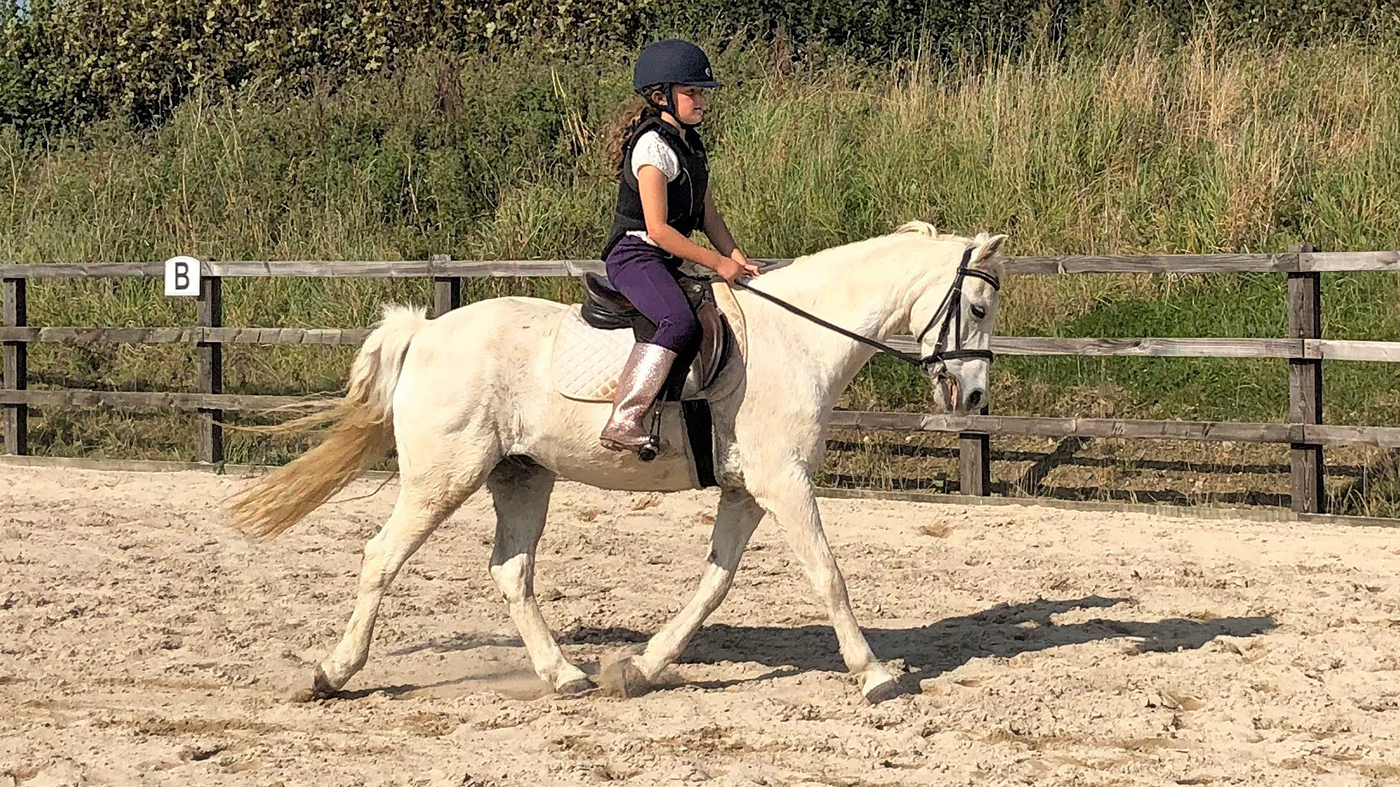 I had forgotten quite how nerve-wracking the run up to a big event can be. With less than two weeks to go, we have been juggling lost shoes, transport problems, and human stomach bugs. Turning the horses out also becomes a nail biting affair. The sheer relief when you fetch a horse back in from the field and see four shoes still on and clean legs is immense. I thought I’d nearly completely blown my competition chances a couple of weeks ago. I was in a great rush to pick up my son from school, flew out the door at a million miles per hour and slipped on a set of wet wooden steps. My feet flew out from underneath me and an entire 11 stone of Katy Malone landed on one buttock, right on the pointy corner of the top step, and scraped down the edge of the remainder of the steps, performing a 180 degree skid on the gravel at the bottom. I was, of course, helpfully wearing shorts. 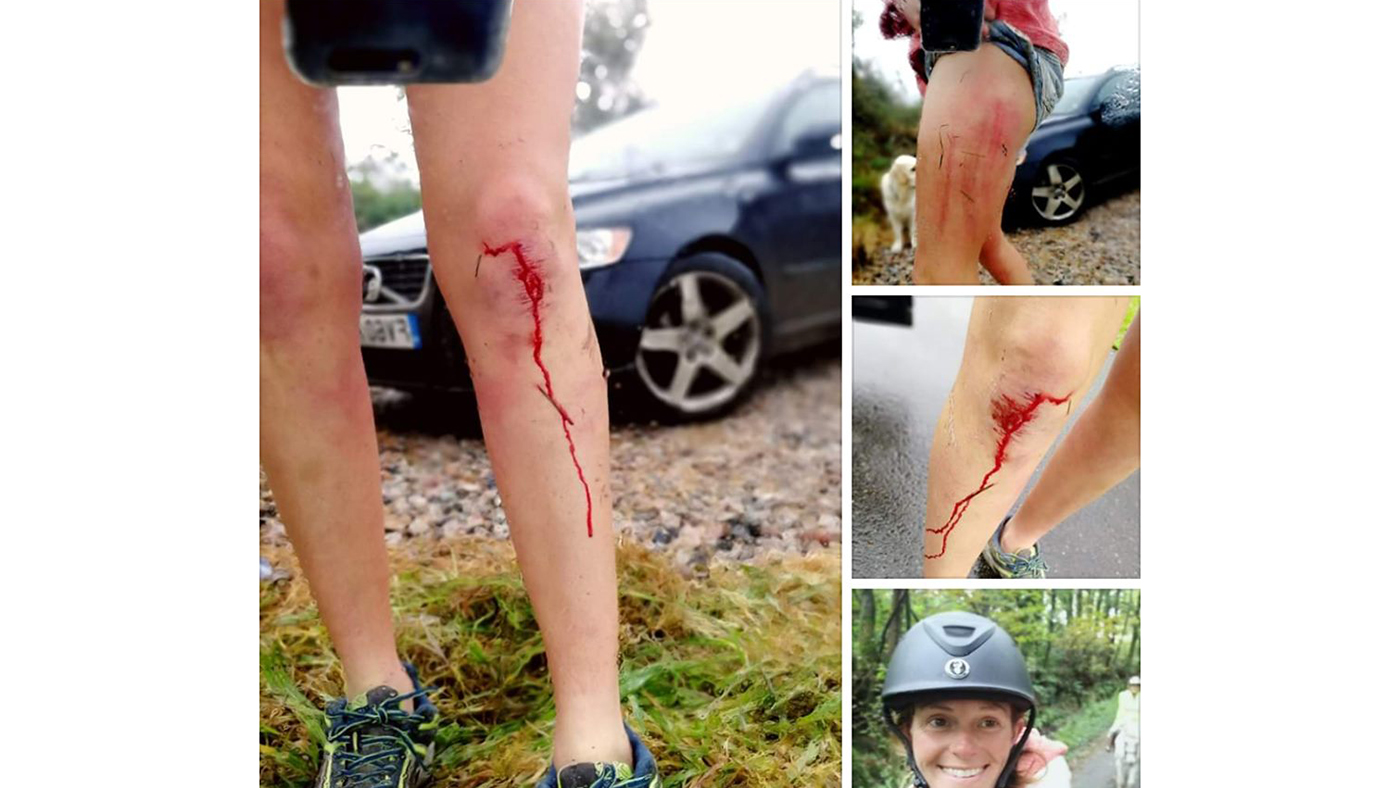 Jerome heard screaming from inside the house and opened the door to find me motionless at the bottom of the stairs performing labour-style breathing. It was an incredibly painful fall. The type where you lie very still and undertake a mental assessment of the likelihood of broken bones.

Thankfully, no bones were broken. But I was left very battered and bruised, with a buttock injury that made sitting in a saddle mildly excruciating. A quick check at minor injuries some days later confirmed that the haematoma that had formed was resting on my sciatic nerve. Luckily, Chunky’s fitness is more of a pressing need than drilling the movements, so I prescribed us both a week of light seat hacking. 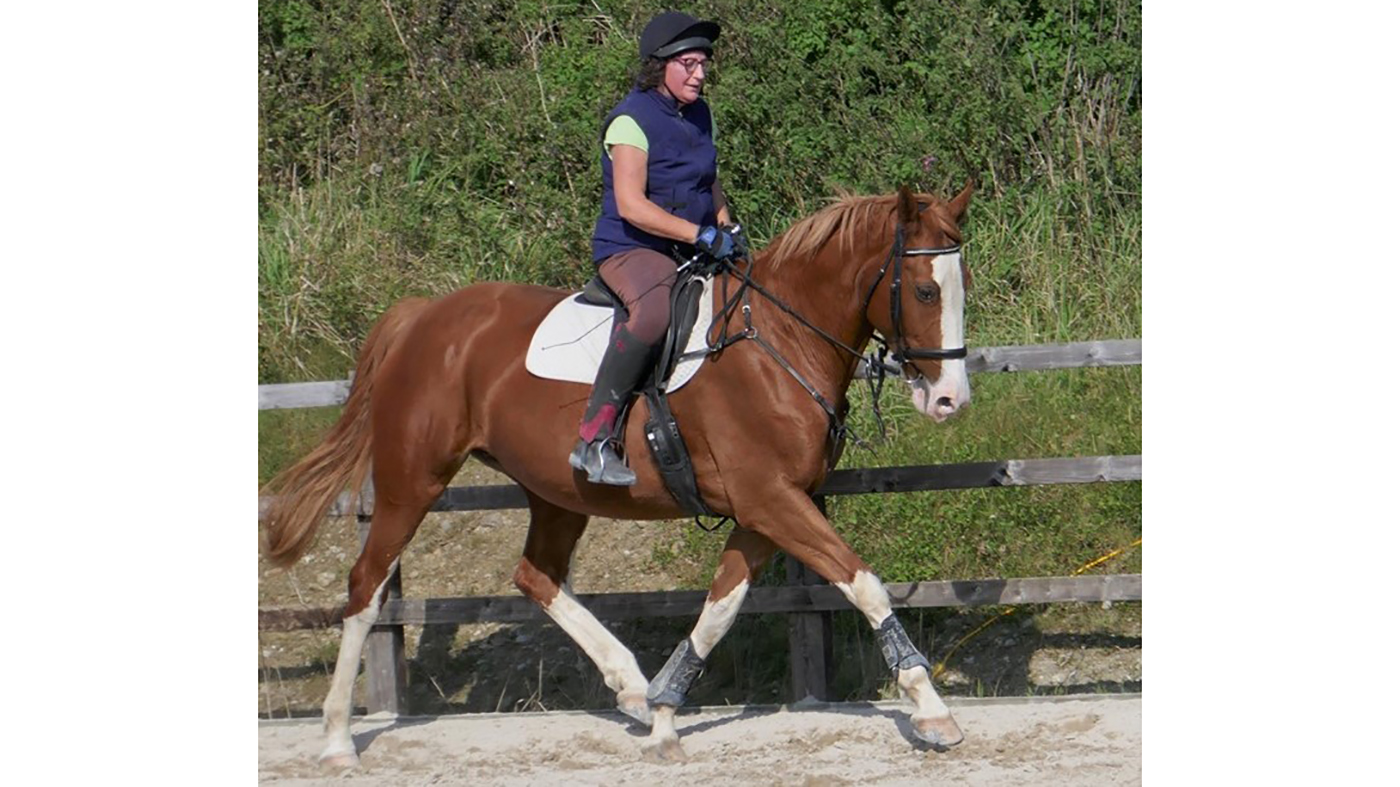 Kate and May prepping for Cricklands

Unfortunately my accident had coincided with major works on our domestic water system, so there was no opportunity for a hot bath. In fact, I was having to have a shower each evening using cooking pans and a cup to throw the hot water over myself. These hot pan showers were performed out on the decking of our back door, watching some beautiful sunsets. It was a risky manoeuvre. It would have been quite mortifying to have been caught in the nude with my shampoo and pots and pans by an innocent chance visitor. This is part of the reason we have strict business hours at the yard! 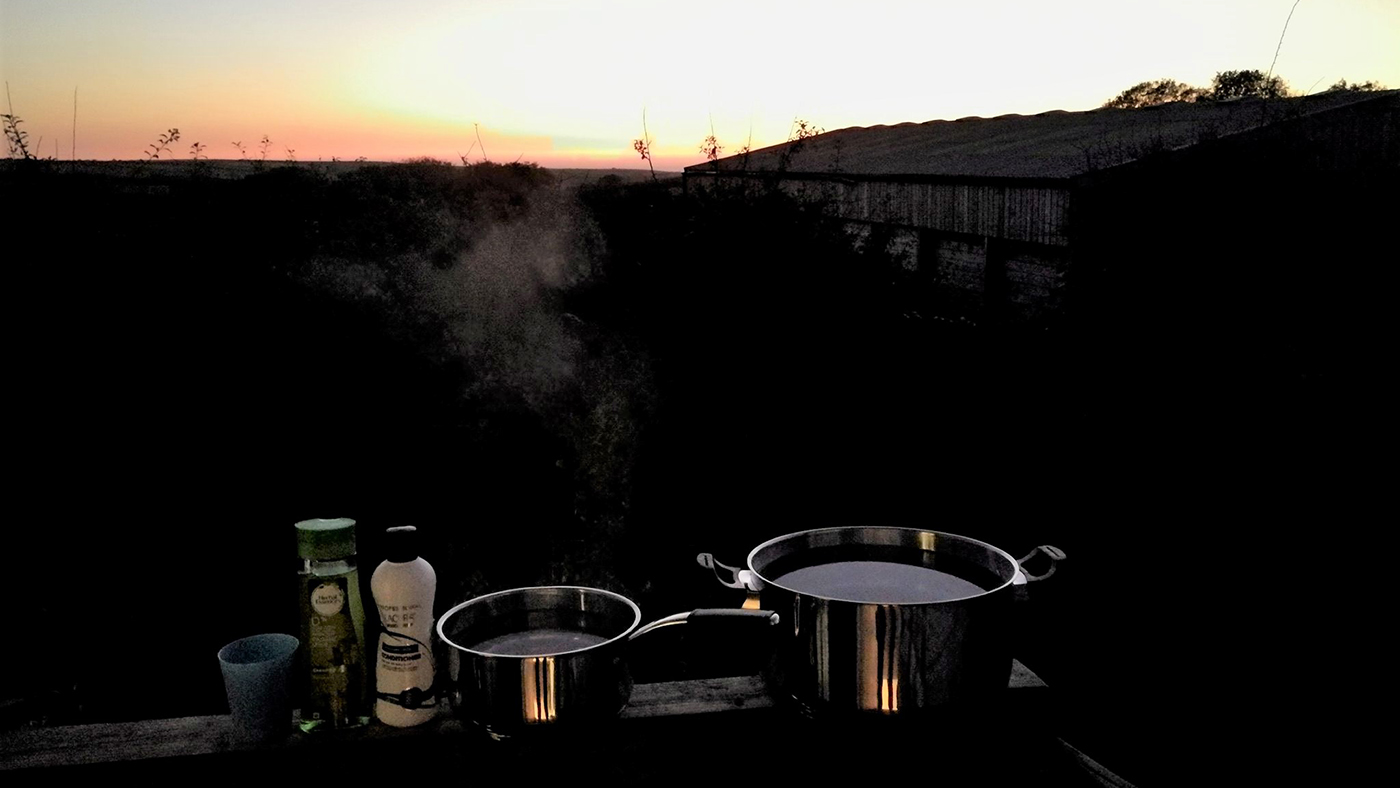 ‘At times, I felt more like I was running an equine hospital than a livery yard’

I did get away with my indecent exposures however, and we now have hot running water in the house again. My right buttock is still swollen and grotesquely misshapen, but I can canter and do sitting trot! Now just to keep everyone, horse and human, sound, happy and healthy until October.