On the Road with SmartPak: The Iowa Walkabout Tour 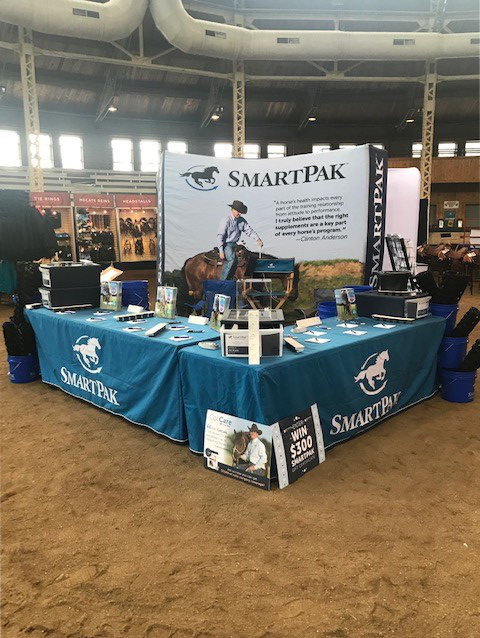 SmartPaker Danielle and I attended Clinton Anderson’s Walkabout Tour in Des Moines, Iowa on May 18th and 19th at the Iowa State Fairgrounds. For those unfamiliar with Clinton’s tours, he selects a handful of cities each year to put on a 2 day weekend clinic filled with demos of his personal and local horses. After kicking off in February in Buckeye, Arizona, Iowa was the last stop on Clinton’s 2019 tour, following stops in North Carolina and Oregon.

When we arrived Friday, The Walkabout Tour’s dedicated staff, ambassadors, and volunteers from Downunder Horsemanship were already hard at work prepping the arena and vendor booths for Saturday’s opening. Our booth, along with fellow Clinton Anderson sponsor HandsOn ® Gloves’ booth, was located right next to the gate so we had a great view of all the demonstrations.

While the weekend weather forecast called for heavy rain and scattered thunderstorms, Clinton’s fans and supporters were not deterred and showed up in large numbers, lining the block around the pavilion prior to the doors opening. The weather even held out for the most part, with only scattered showers and periods of some sunshine!

With such a large turnout, not only did we get to chat with many of our amazing customers about their horses, we got to meet so many new customers as well! It was so exciting to see how many people across the country are enthusiastic about improving their partnership with their horses and providing their horses with key nutritional ingredients and important areas of support!

During our three days in Iowa, Danielle and I had the most amazing food! We found a hole in the wall Mexican restaurant in Altoona, had tapas in Downtown Des Moines, and had what we agreed was the most incredible pizza we had ever tasted in our lives at Des Moines’ Eatery A. I had the #15 pizza, that had an olive oil based topped with fresh local spinach, goat cheese, honey, red onion, and Danielle took our server’s advice and got the #10, which also had an olive oil base and was topped with Havarti, fontina, mozzarella, grana, and rosemary—I know what you’re thinking, isn’t that mostly just cheese? The description doesn’t really do it justice, it was delicious!

While that’s a wrap on the Walkabout Tour for 2019, stay tuned for tour date announcements for the 2020 schedule later this fall!