Hovis’ Friday diary: I am hiding in a bush, praying not to be recognised 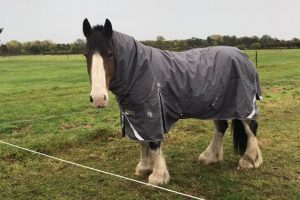 Many thanks to all of you who responded to me last week, offering words of condolence for the horror that my eyes experienced. I will be honest, I may now have PTSD whenever I hear the word “unicorn” and jump at the sound of a spray can more than Jimmy Carr hearing the words “offshore”, but I think with regard to that “incident” I may just about recover.

Which is more than can be said having now seen my screen debut on TV last week. It should have been the highlight of my illustrious career, my moment in the sun, my platform for global domination, Hollywood and eternal stardom. Instead I am hiding in a bush, praying not to be recognised.

In simple terms, who in all god’s name let mother have a star speaking role? I mean, seriously? My chances of hitting the big screen in a big way went down the toilet faster than a lift in Speed 2 the minute she opened her mouth. For a start she had her “phone voice” on. Trust me, she doesn’t sound that snobby when she’s yelling about my dubious ancestry across the fields at full decibel as I cavort past her like Darcey Bussell on a pogo stick, or indeed when I’m reversing at high speed down the middle of the road because, you know, something moved. I can assure you that the “A” is a LOT shorter then and the use of adjectives a lot more akin to Belfast docks on a Friday night than high tea with the queen, so don’t you all be fooled.

Then she’s seen stroking me enthusiastically like Aladdin suffering from OCD. Lamp rubbing or no lamp rubbing, the only wish that was happening there was me frantically wishing for the ground to open up and swallow me. And THEN, then she says there’s “life in the old boy yet”. I mean, seriously? What in all hay’s creation did she have to tell people I’m old for? A) you’re only as old as the mare you’re feeling, so that makes me range from five-21, b) I’m a cold-blooded breed so thus slow to mature, meaning in Clydesdale years I’m only 10, and c) It’s hardly as if she’s a spring chicken herself. Who is still on box rest and who is cavorting about at the moment like a blue Smartie-fed child with attention deficit disorder? Humm? Who? How am I going to pull anything more than a muscle if she’s there on national television calling me old? She may as well have told the ladies that the Hovis makers are only capable of a negligent discharge and just had done with it. Wham bam, no chance with Ma’am.

But the worse was yet to come. After then making me look like the steed of Hyacinth Bucket, suggesting that I’m so far over the hill the winner of One Man and His Dog couldn’t find me, and rubbing me like a cheap antique lamp she THEN kisses me.

Is there not a rule in this country now about animal cruelty? Why aren’t the RSCPA or someone banging her door down? Trust me, I tried to dodge her, but she’s got the reactions of a granny viper at a family reunion (and the teeth to match) and had a grip on my lead-rope like Boris Johnson’s aide on his disposable cup. I had no chance. I can only pray that as much as I wanted this brief (blink and you missed us) TV appearance to lead to film roles, a trailer full of moral-less mares and me being ridden by Zac Effron (for you my female fans, because I think of you like that), then I’m more minded now to pray that it passed by most of you as unseen as Gemma Collins’ weight loss…

‘I can only assume he either hadn’t seen a mirror, had secretly always wanted to be known as Applejack Princess

It’s one of life’s missed opportunities, and as much as I would like to thank the producers for thinking of me, next time can I just look manly, moody, magnificent and mute? Please?

For all the latest equestrian news and reports, don’t miss Horse & Hound magazine, out every Thursday.