Annie Joppe’s endurance blog: I felt a little like a quivering wreck at the end 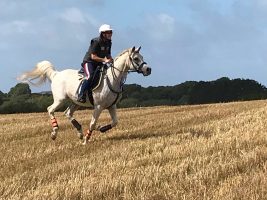 Dilmun has now become my target. At the moment he seems to be quite pleased to be the focus of my attention. A few weeks ago he started his slow work and his even slower build up to some vague form of fitness. Dilmun is classified by my husband as ‘obese’ but I feel he is being a little unfair. Dilmun was rather large that is true, but now he resembles less of a Zeppelin and rather more a rounded individual with a slight, but gradually more pronounced ‘waist’.

Riding and working him is mostly a joy. He’s had most of the spring and summer off and, after riding Chiara and Fantom, I had forgotten a little what an incredible character he is. He is spooky, no question about it. He takes spookiness to a whole new level, spooking at every upside down leaf, every twig out of place and massive spooks when something that always used to be in a certain place has moved — it’s fun! I’ve now begun to canter him a bit in the stubble and it has reminded me just what a pro he is; changing canter leads on request, totally balanced and mostly very economical in his movement — I love him!

The training for a 32km graded ride (which is what Dilmun is aiming for) follows roughly the same format as training for a longer, faster race — it’s just that everything is much more relaxed, shorter sessions and so much less intense. It has been fun lungeing him with Chi’s pink gadget to encourage him to stretch, followed by relaxed schooling, which he is submitting to at the moment. This, however, is an activity that he loathes. Dilmun is an obliging horse, reactive to suggestion, but formal schooling simply doesn’t do it for him, and why should it? Every horse is different and Dilmun is unique. 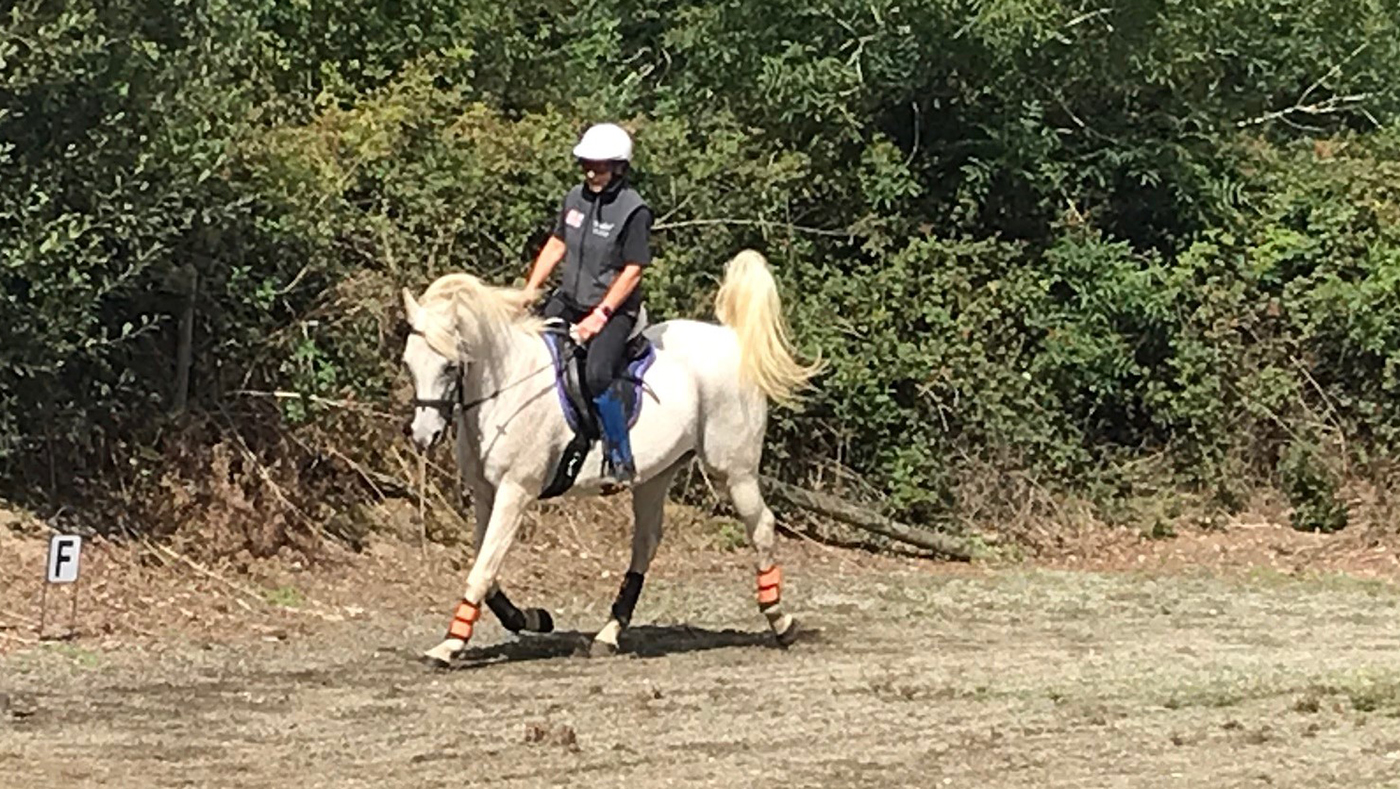 Dil having to do school work

Post-Euston Chiara was trotted up and lunged and, joyously, she was completely sound. I then had her shoes taken off and the amazing Nicki gave her a massage and general check over, which this time she actually enjoyed pulling those dopey horse faces with the long top lip. Oh how I will miss riding her now that she is starting her three-month holiday. When her shoes were removed, it became apparent that something had gone right through her pad and into the sole of her foot, although that had nearly healed. Those flints (or magpies) have a lot to answer for, but at least I now know why she was vetted out at Euston.

I have since reflected on our experience at Euston Park masters and have mixed feelings; some good, some bad. The highpoint must be the Europeans and the performance of our team and the low point the death of the horse in the CEIO; our actual experience was somewhere in-between. The sheer organisation and hype is staggering, riding it demands so much attention to stay out of trouble and the vetgate, although enormous, is so full.

From a crewing perspective this was so demanding. My husband was my ‘on road’ crew and I quote: “the pack came through so fast, it was chaos at the crew points and the driving was hairy to say the least!” Graham alternated between road crew and vetgate crew, when we were certain that they could get back off course in time for me to arrive. Graham takes the pulse for me and does the actual trotting up, so he is vital to the process. Katherine stays in the vetgate, maintaining our crewing area and prepping for our return, getting food for the road crew and icing the boots and the slosh water at the right time. All this is done (as well as a trip to the stables to muck out) while I am out. When I arrive, the team leaps into action holding Chi, offering water immediately to make use of the drink reflex, untacking, cooling and pulsing. All this is done while Chi is doing her best ballerina impression. It is precisely at this point when we could do with another pair of hands (we missed you, Kiwi).

Time of course is crucial here as the clock doesn’t stop until we present to the vets. Until I had Chiara I hadn’t fully appreciated what a difference to loop speeds this made. I guess with Dilmun and Fantom I always expected to be one of the quickest horses to present. Although this time on our second loop we averaged around 18kph, by the time we presented to the vet the loop speed had gone down to below 17kph. This is clearly an issue which needs to be resolved. We need to roughly halve our presentation times to avoid having to go unnecessarily fast on the loops. Much of this is caused by excitement, but Chiara also needs more cooling than Fantom, especially in warm weather, and her pulse generally doesn’t come down so fast. When I had my practice session on Bodmin Moor, I didn’t have any ice on a hot day and I found that, although calm, the pulse took about 6 minutes to come down to below 65bpm. OK, I can’t do a lot about her natural heart rate but I can cool effectively and practice calming her down.

Annie is re-evaluating after an eventful weekend competing

The ancient Wizard has also been trotted, poked and prodded and he too appears to be sound. I will leave putting shoes on him until the beginning of November though, when hopefully he can enjoy some hacking and even maybe the annual Christmas ride (sorry I said that word, even though it is still only September!).

I had made the decision to take the shoes off Fantom rather than contest any one-star competitions in September as originally planned, as he looked flat and uninterested in training. However, after observing his out of the box antics in the field, I decided to have one last ride on him and, to my joy, I discovered that at last all the crops in the local fields had been harvested and I had whole new training areas. As soon as I got on Fantom I knew he felt good with his old spring in his step, so I took my life in my hands and went off training in the stubble — just a short session. Well, wow! The power hadn’t diminished at all and he was awesome, although I felt a little like a quivering wreck at the end. So I’ve changed my mind and arranged for him to head off to a local moorland ride with Dilmun in a couple of weeks, just for fun (or possibly in preparation for something else?).